The 79th Anniversary of Pearl Harbor

On this day in 1941, in the early morning hours near Honolulu, Hawaii, the US naval base Pearl Harbor was attacked by the Japanese forces. During the attack, eight battleships and 20 other naval vessels were damaged, along with numerous aircraft.  The attack also claimed the lives of approximately 2,400 people, both military and civilian. The attack led to President Roosevelt asking Congress the next day to declare war on Japan, and thus officially entered into what history knows as World War II. Shortly thereafter, Japan’s allies, Germany and Italy also declared war on the United States.

Two statements were made that day that most Americans have learned in history class. One was made by President Roosevelt. He stated that December 7th, 1941, was “a date which will live in infamy”. The other was made by Admiral Isoroku Yamamoto, who was the architect of the attack, stated afterwards, “I fear all we have done is to awaken a sleeping giant and fill him with terrible resolve”. Both statements were so true.  From Roosevelts’ perspective, we were the victims of a vicious attack and his declaration of war was a response to that attack. From Yamamoto’s perspective, he knew the attack would unleash America’s fighting spirit and resiliency. 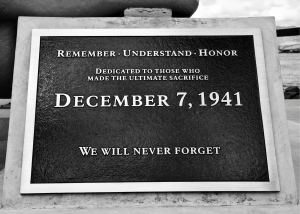 America’s entry into the war meant that it had to overcome many obstacles. America had just gone through The Great Depression and was still attempting to recover economically. It did this by having to begin massive spending to build up the military while converting numerous industries into a “wartime” production mode.  Also, many restrictions were imposed on the American population for this effort. American’s rose to the occasion and demonstrated selfless patriotism, while thousands of Americans via the draft and volunteering joined the military. In short, America rose to the occasion.

While America’s military would go on to prove its worth and skill in battles, such as Iwo Jima, the Battle of Midway, and the Battle of the Bulge, its home front saw civilians rush to work at the wartime production efforts, while making many sacrifices for the war. As we take a moment to remember the attack on Pearl Harbor today, let’s also remember what that attack meant to the country and the world as a whole. The sacrifices that were made by all American’s during that time were extraordinary and a testament to American spirit, ingenuity, and resiliency.